Sorry I wasn't around much last month--real life got in the way most of the time. Not in any kind of way that would be interesting to write about, though...thanks to the meltdown I had in the beginning of April, I'm still playing 'catch-up' in all areas of life that got neglected then.

But hey! I'm coming to you half-vaccinated!

That's probably been the most eventful thing that happened to me this past month. I managed to get my first dose of the Pfizer vaccine at a CVS. The process itself was fairly seamless. Everyone running the operation was very friendly, and the folks in line with me were eager to make small talk. I've been locked away in my room for so long that I've taken human contact for granted. Kinda felt like a robot trying to process answers to people. But even when I returned home with a sore arm, I felt hopeful--like I left thinking not all of humanity is a horrid infested place filled with despair. There's still a little hope, in all the darkness.

I've been kinda wreckless with my money. I've made a few impulsive gacha game purchases (small ones, but still...) and I bought RPGMaker MV on sale through Humble Bundle. I'm reaaaally excited to finally own a version of RPGmaker, you have no idea!!!

Back in 2012 or so--a formative time in my life, as I was just entering into my 20s and was figuring out who "adult-me" was--this style of game was super popular. There were some beautiful games that left an impression on my soul (Yume Nikki comes straight to mind...) and the idea of trying to capture that sort of raw spirit I felt then has been rattling around in my brain for ages.

I also bought a piece of furniture...it's just a cheap entertainment cabinet from Amazon, lol! Now that the box is here and the pieces are all over my floor, I've realized that I've never really had to put together any of my furniture myself before. Honestly, most all of the furniture in my room are old hand-me-downs. I don't really own anything under my own name...but now I do, and that's...something!

It's safe to say that our baby chicks are no longer babies--more like hormonal teenagers that won't do as their told, lolol~ They've become very good at escaping the boxes we've been keeping them in up until now. They want to explore (and eat!) everything! Mom got a bit too intoxicated one night and let them roam free on our porch. Their adult feathers are almost done growing in, and they're so pretty! It's almost warm enough for them to start living outside.

So my grandfather's cat, Sage, had to be put down. Over the last month, she started to go blind in one of her eyes. I'd try to ask people about it, but they'd always shrug me off, saying "Oh, she's just old and sickly. She doesn't have a lot of time left. Don't bother her." I think my grandfather was hoping she would pass peacefully in her sleep, or something...but she didn't. Her blind eye started oozing and eventually this tumor thing popped next to her other eye. It was getting really obvious that something was seriously wrong, and that she was in pain. Mom finally made an appointment to get her seen at the vet, and it was finally decided that it was time to have her put down. My last evening with her when I was having dinner at my grandparents' house, the night before she died. I sat next to her, and she let me pat her gently. Looking back on it, I have to wonder if she wanted me to clean the dried blood that was still on her, but I was so afraid of causing her more pain that I didn't want to touch her face too much.

Anyway, the whole thing makes me very sad: she didn't deserve to suffer like that. There was a time in my life where I felt like her and her sister were the only living beings that cared about my existence at all. I'm attaching a photo of when she was happy and healthy, in her memory.

But life goes on. I press flowers and live to see the smiles of my friends. I'll be okay. 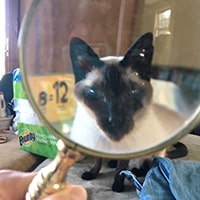 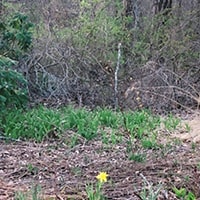