I usually don't like to update my diary here when I'm in a dark headspace, but things have been....bad. Like I'm talking unable to sleep for days, throwing-up-from-guilt-and-grief-kinda-bad. I'm not sure if it's even worth getting into the details of how I got into that space in the first place: if I try to explain it, it just makes me embarrassed. Just for the sake of making a little note for my future self, though--it involved a lot of he-said she-said about someone I admired...and it turned out that person was actually really ugly, deep down.

And somehow this person that doesn't know I exist shattered my world, for a good week. It felt like a break-up, honestly--it shouldn't have, but it did. I had forgotten what it was like to feel that bad. The frothing rage that just flowed through me, that I could barely contain while my everyday life had to continue on like normal. Drinking to try to numb the pain so I didn't accidently snap at someone close to me. (Even then, it didn't really work...) Wondering if there will ever be a time where I'm not let down, wondering if there's something I'm doing on my end to manifest this sort of bad karma. Straight men can really only think with their monkey brains, can't they...?

Cocorosie always seems to be my go-to when I face these sorts of feelings. "I'mma shake you off, though...and look back with no remorse..." I'm feeling a bit better, already. As long as I don't start dwelling on it for too long, I don't feel as sick. There will be a time where this will all be a stupid memory, something that I can laugh about. It feels bad now, but...someday, I'll be okay.

One thing I can say for certain, is that I have some beautiful friends in my life right now. Feeling real lucky that I've had people to talk to while going through all this--both online and irl.

E hosted a social-distanced gathering and I got to see some faces I hadn't seen in a long while. Finally got the chance to give M her birthday present! She seemed really happy, I'm so glad~ ;w;

My mom's been on a trip with my aunt for a whole week...it's like she got on a plane as soon as she got vaccinated, lol. My family has run me ragged in the meantime. I've been stretched so thin caring for all of the animals, checking up on my grandfather, picking up after my little brother...My body hurts. I'm going to collapse now. 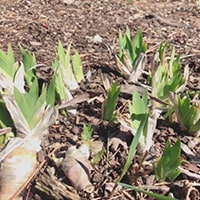 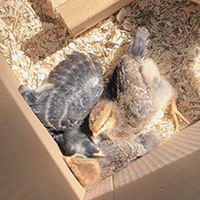 Spring has appeared so fast! We had a warm spell here until this week, where its dipped back into winter weather again... ^^;;; But there's already some flowers peeking up from the ground, which is exciting! I'll be able to work in the garden again pretty soon!

I haven't found the time to update in awhile, but a lot has happened, geez...Anyway, the baby chicks are here!!

I think they've been with us for just over a week now. We didn't have much warning for when they were going to arrive--we made this deal with our neighbors to get them, and they just called one evening saying "They're here! Come pick out the ones you want!" lolol~ Thankfully we did have a box to put them in, and we had just bought their baby food that morning...Also I formally met my new neighbors in person, which was kind of nice--They seem much kinder than our last neighbors (they were real jerks who abused their dogs...) so I'm really grateful to finally have normal people living next door, LOL.

The baby chicks are real stinkin cute! We can't come up with names yet, because they're still too small to figure out their genders...but they're getting big fast--their adult feathers are starting to come in on their wings and tail. They're just figuring out how to flap and jump around. My dad built them a tiny roost to play on in their box, and they love it!

Things went sour at work. I accidently got into a disagreement with my boss--maybe disagreement isn't the right word? Uhh...well I accidently sent my boss into a homophobic/transphobic tirade by mentioning how trendy unisex/genderless fashion was. It feels even more nonsensical typing this out. She's a 60-something year old lady, so I don't expect her to understand everything "the youth" is into, but damn...it was really shocking because she's usually so pleasant. I thought I might get sacked because she got so riled over it. She seems to have gotten over it now though...but I'll feel better when I see my first paycheck. :\

When the weather was warm enough, I spent a lot of time sitting outside with my other chicken, Penny. My mom read something about smoke scaring away hawks, so most days we've been building fires in our old fire pit. I managed to get poison ivy all over my right arm when I was digging out in the bushes out back looking for sticks to burn...it was really painful.

I would have liked to have a little more free time lately, but between my family/work/animals, I feel like I'm being pulled in 5 different directions. It's been hard to get my priorities straight. I finally did laundry after like, two weeks... ^^;;; Since my family has gotten vaccinated, they're determined to start living life "normally" again, and have been inviting friends over...It's nice to see old faces and have some hope for the future, but it's a little worrisome, because I don't have my vaccine yet. .___. We had a small Easter dinner yesterday consisting of my grandparents and one of my aunts--I ate upstairs in a different room than them because I was too afraid to take my mask off. They weren't passive agressive about it, at least...but I feel kind of bad about it. 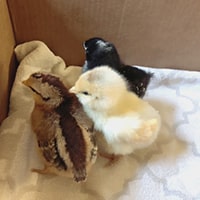 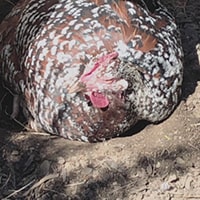