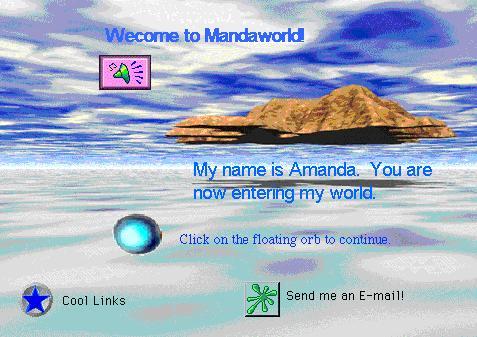 Source unknown, screenshot found by Relics of a Deleted World on Tumblr

Welcome, cyber travelers ! Has your journey to this page been far and long…? Have you been wandering digital wastelands in search of an oasis? Come, have a seat next to me and rest your feet. The sun is still on the horizon and the flowers smell sweet. I'll tell you a tale from long ago, of the time of webmasters and webmistresses and their carefully-crafted domains, in the land of the World Wide Web...

—a word so familiar in internet vocabulary that you probably don’t give the phrase a second thought...but, perhaps you ought to?

After all, the homepage is the first thing you see when you log on to the 'net. It's the starting point, the base of all operations, the springboard for your journey into cyberspace. All journeys into the vast and mysterious realms of the web begin from this page.

One of the very first popular "personal" homepages! Screenshot by The History of the Web

According to this article by The History Of The Web, the idea of a "homepage" was an invention of Tim Berners-Lee, the creator of the World Wide Web. His idea was to let every internet-user create their own space using the coding language HTML, whether it be public or private. Initially, the internet was viewed as a tool for corporations...and they called their homepages the "landing page". 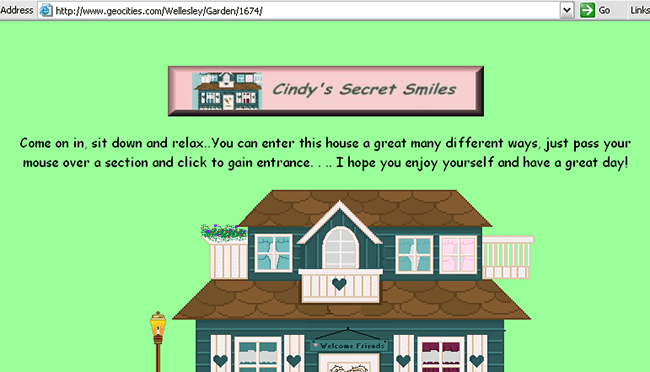 So if a website's landing page became the first thing people would see, it only seemed natural that it would be the place to introduce yourself and put your best face forward. There came a certain excitement with this: How did you want the world to see you?

Have you noticed, while looking at older websites, how people often write like they're speaking
directly to you ?

Like being handed the microphone on an "Open Mic" night, webmasters suddenly had a spotlight on them. This sort of exposure used to be limited to those who had access to mass media like newspapers and TV: the concept that any joe-shmoe with a computer could now broadcast whatever they wanted to someone on the other side of the world was mind-boggling! 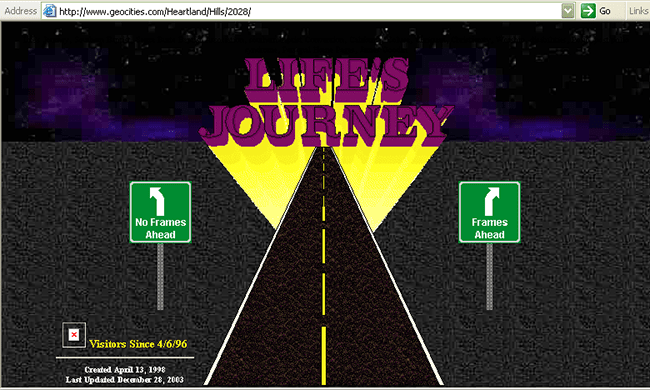 It only made sense that folks with this newly-granted access wanted to make the most of it. What was once a tool meant for government officials was becoming a colorful place to communicate!

This personal expression is what renamed the "landing page" to what we know it as today:
the "homepage"! 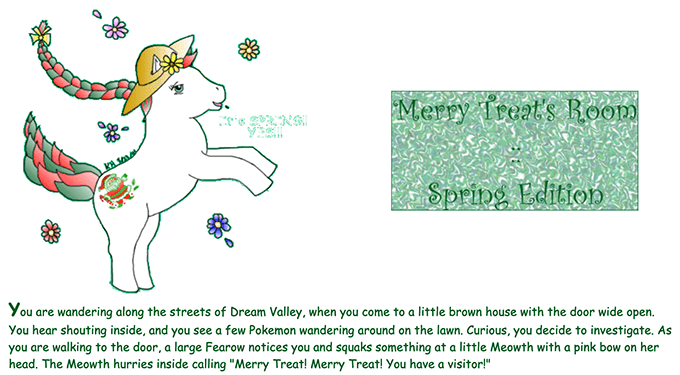 From my own personal memories of the early internet, encountering someone's homepage felt like a little window into their world. Letting someone into your digital space felt more like inviting over house guests you've just met...you'd get the nice china out, iron the drapes, and try to put your best face forward. "Yes, hello, welcome! This is my home!"

After all, why have a personal homepage if it didn't feel like a home 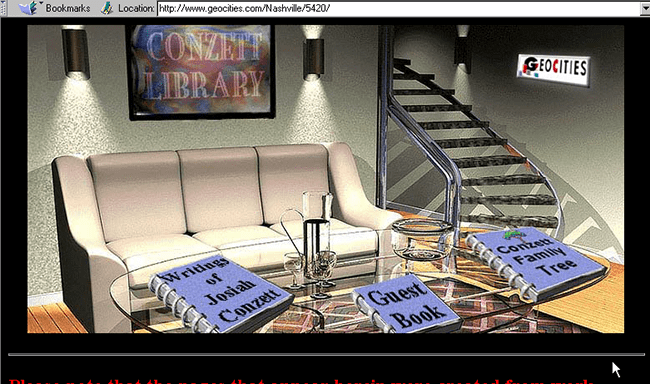 ...And many grand homes were made! The sky was the limit, and the webpage became the artist's canvas. There was a unique culture around creating your very own space on the web. Homepages were furnished in delightful pictures of cozy cottages, flowering gardens, and warmly-lit dens. Webmasters and webmistresses invited visitors to explore their pages, and leave a note in their guestbooks before leaving. 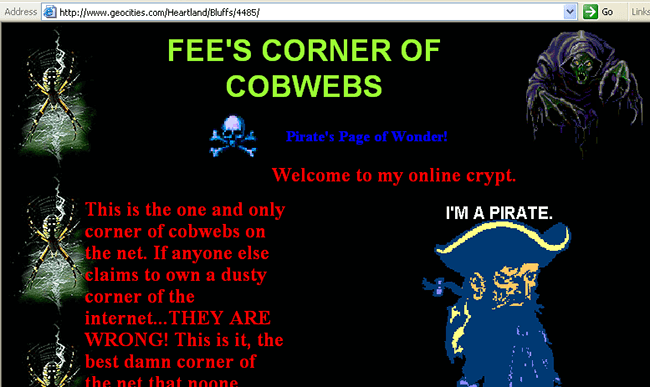 But not everyone's personal space took on the traditional facade of a "house". The word "home" has many different meanings, and the personal spaces that began to pop up on cyberspace reflected that. There were crypts, castles, caverns...without phyiscal limitations, your space could exist anywhere: on alien planets in outerspace, delightful fairy glens, or even the depths of hell...There was just about every flavor and style of abode imaginable! 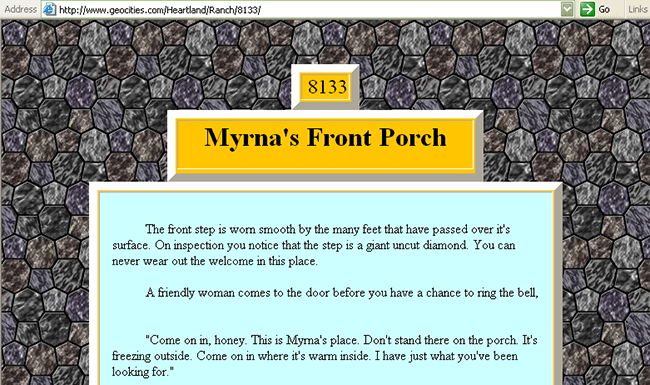 If you wanted to roleplay as an immortal vampire in a haunted castle full of bats, you could do that. If you were a granny learning HTML for the first time and wanted to create a cozy little virtual cottage where you could share your favorite recipes, you could do that. whatever the creator dreamed up, they could put on their page, only limited by their words and use of pixelated gifs. 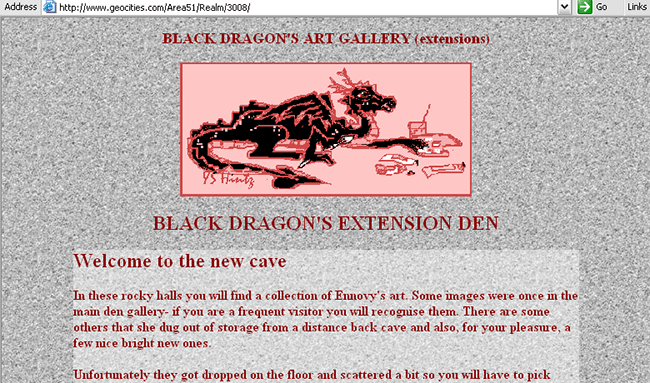 Webmasters of the old web were the pioneers of social media as we know it today. They approached the blank white space that was the early internet with the eyes of adventurers', carving out their own personal territories in digital realms that they could call a home. Cyberspace held a limitless potential, that you could travel as far as your imagination could take you. 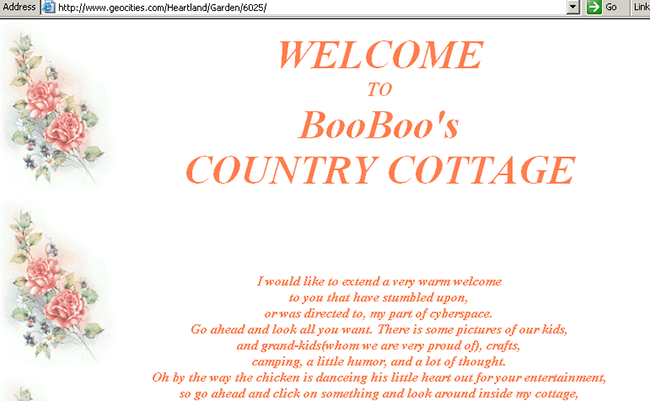 There was this element of performance that was being realized in ways that were still being imagined: The webmasters of yesterday were the gentle-folk of the salon, creating the culture and the accepted "netiquette" that would shape the rest of the internet. One could argue that these were the prehistoric precursors of bloggers and influencers that we have today. But the atmosphere was different then: it was more honest, more genuine, more innocent. From a time when before the internet was overwhelmed with advertisements that couldn't be discernable from organic posts, fake news, and AI-controlled bot accounts...

Creators just...created. Whether for themselves or for an audience, whether for leisure or for business. The boundaries of the modern web had not yet been imposed, and HTML and CSS were the tools for the painter's canvas. The internet was a place full of expression and color, overflowing with life...Nowadays, we're confined to the same handful of websites and pre-designed templates, fighting with needless censorship and confusing algorithms. It's as cold and sterile as an embalming table. 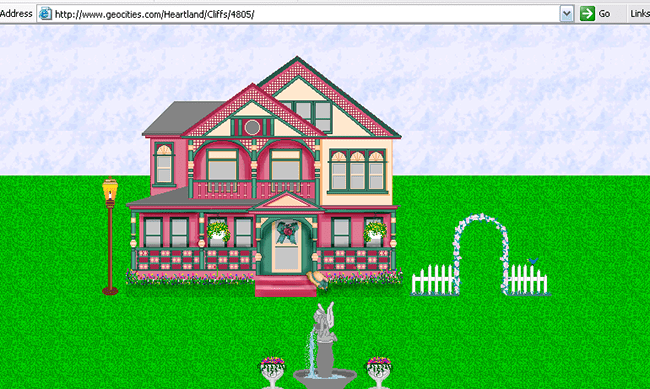 Does your heart ache for home? Would you like to have your own homepage, too...?

Now, dear friend, I know I said that these were tales of days past, but that doesn't mean that the spirit of the homepage has to be lost...! In fact, interest in the "old days" is growing, and communities are springing up to celebrate these old ideals and aesthetics. In fact, there are some wonderful modern websites that have this same sort of warm atmosphere: some of my personal favorites invite you to a stylish Y2K-style lounge, and summon you to a mysterious mansion for an exciting text adventure journey.

So if you're nostalgic for old-school homepages, why not make your own...? Don't worry about lack of skill--many creators of the early web were beginner's themselves, so if you've never made a website before, take it as a learning opportunity! Besides, wouldn't it be nice to have a space that's entirely your own...?

Hm, what's that now? You have to get going? Ah, right...I suppose I've been prattling on for quite awhile now, haven't I? The sun has started to set...So I guess it's time to bid you farewell. I hope your adventures through cyberspace lead you to many beautiful things--and maybe when we cross paths next, I'll be visiting your homepage!

Goodbye, dear friend.
May your travels lead you back to home.


Written by teddybear-halo,
who's home is on a little cloud